How does Boro’s beast compare to other ‘target men’ and what even makes a good man up top?

1 goal all season.  2 proven goal scorers on the bench.  Whats going on?

Using Qlikview I wanted to see if it would be possible to write a useful report on a small data set within just 15 minutes.  Middlesbrough F.C. are close to my heart and there has been a lot of debate in the local newspaper ‘The Evening Gazette’ over the apparently dismal form of Alvaro Negredo.  So why not?  Here we go:

Strikers are judged on goals they say.  With just 1 goal to his name you’d think that Negredo is surely on increasingly thin ice but Aitor Karanka, Middlesbrough’s manager and compatriot, has shown nothing but faith in the man many simply refer to as “the beast.”  He quite rightly points out that a target man is there to contribute more than just goals.  Traditionally the target man uses his favourable height and strength to win the ball in the air and hold it up for onrushing teammates meaning that his key statistics should be % headers won, passing accuracy and assists as well as those all important goals.  Increasingly, lone strikers are also tasked with closing down the ball so we could look at their tackle and interceptions figures.  So how does Negredo compare to other beasts in the Premier League?  I’ve used data from whoscored.com and I’ve excluded Giroud and Kane due to games missed through injury.

A totally made up word but let’s look at how I’ve devised this measure. 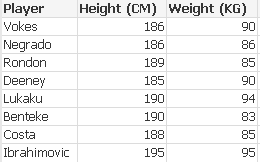 Let’s look at the results:

So the beast is not the top beast under these terms.  Of course there are other factors which I cannot capture such as determination and bravery but hey, it’s a start! 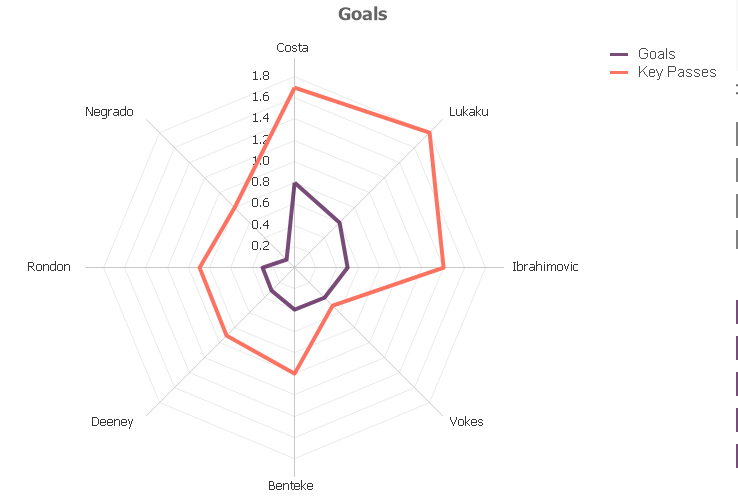 However, Negredo starts to perform well when we look at his defensive duties high up the pitch (tackles and interceptions per game).  This is interesting given the stick Negredo has been given for not putting in a shift.  He may not be charging around the pitch closing defenders down but for a player of his type he certainly isn’t shying out of a tackle.

Lastly we can look at a measure called contribution (total passes, headers, tackles and interceptions per game) and compare it to goals to test if all those attributes that a target man must posses actually translate into goals.  Strangely we end up with two trend/correlation lines.

The lower diagonal row:  Those whose score more goals despite typically lower contribution.

The upper diagonal row:  Those whose high contribution doesn’t translate as well into goals.

If anyone has a better explanation let me know!

I’ve added a third dimension to this chart and the size of each dot corresponds to the number of key passes.

So what can we take from this short piece of analysis?  Clearly Negredo’s lack of goals are a concern and other target men are showing him how it should be done.  That said, his passing rates aren’t the worst and he’s putting his foot in to win the ball back in an area that can cause panic for the opposition.  Personally, I’m happy for him to be first choice striker but I’d like to see Nugent and Rhodes get a bit more game time from the bench to see what a different style of striker can offer.

—-  The above charts mostly used Qlikview’s defaults and were easily set up –  a few seconds each.